Because I had a marketing mastermind group meeting to go to first, I missed the start of The Art of Marketing. I wanted to meet Keith Ferrazzi and ask him to sign the book we’re both in: Success Secrets of the Social Media Marketing Superstars. But, I missed his presentation. One of my friends thought she spotted him so I went up and asked if he was Keith. “No, but that’s a really good book!” non-Keith said. If you were there, feel free to add a link to your review or share your thoughts in the comment section.

When I first moved to Chicago, one of my friends often commented that I must be wearing “weirdo nip.” The strangest people in the room seemed attracted to me, for some odd reason. And, that was okay with me. Characters fascinate me. According to Seth Godin, it’s better to connect with weirdos than boring people.

Seth’s slides were entertaining, thought provoking and laugh inducing. Like every other speaker, he asked for crowd responses. Getting people to raise their hand keep them listening and engaged.

He challenged us to do something that feels a little nutty and culty. For example, LittleMissMatched.com is a company that sells three socks that don’t match for $10. Their revenues increased from $1 to $40 million.

Seth says if you want to write a book, and you should, read The Domino Project  blog first.

Gary’s energy lights up the room. It’s like taking a dimmer switch up to high power, bringing in a bank of flood lights and then – what the heck –  let’s open the rooftop and let the sun shine it, too.

Because I’ve written about Gary before, [including these posts Gary V day in Chicago and Gary Vaynerchuk Affiliate Summit West keynote] and I’ve watched lots of Gary V videos, Gary’s message sounded familiar, yet new. It’s kind of like hearing your favorite band play their best set list with a few fresh riffs here and there.

Gary doesn’t use slides, but he doesn’t need them.

He says the Internet is the biggest culture shift we’ve ever lived through.

Gary talked about spending money on ads: “Why throw money at a platform people won’t ever consume? People aren’t looking at billboards, they’re not even looking at the f______ing road.”

He believes Twitter search is the most powerful marketing product out there. How often do you use it?

If content is King, context is God. Getting context right is critical.

If you want your customers to love you, you have to love them first.

When a customer asked Gary about the ROI of social media, he asked “What is the ROI of your mother?” Think about that one for awhile . . .  where would you be without Mom?

A huge proponent of scaling by caring, Gary’s company often sends thank you gifts. How to decide what to send? Watch what they say on twitter. When Gary sent a signed Jay Cutler jersey to a Bears fan, the gift resulted in multiple referrals to wine buyers.

Mitch talked about five[ish] concepts including the one screen concept: the only screen that matters is the one in front of your customers. We’re moving to world without a keyboard or a mouse. And, people are consolidating the number of screens they watch from three or four into one or two.

Another dramatic and powerful shift is in the way we pay with apps like Square. This company’s vision is “no more cash registers.”

Mitch said if you’re wondering where to start with marketing, begin thinking about your brand’s narrative. Use the platforms to tell your story.

The only woman speaker, Randi brought a sunny sense of energy. She is a new mom of an adorable son who is already extremely dashing in a suit with a bow tie. New moms are among the biggest users of Facebook.

Randi took us behind the scenes at Facebook where 4,000 people work. It sounds like such a fun place!

Facebook holds 24-hour hackathons to generate innovation and inspire creativity. For example, a giant QR code on Facebook’s roof now lets you scan the code with your smartphone from an airplane. Do you think other companies have roof QR codes?

Randi told us who not to be on Facebook: an obsessive food blogger, the crazy cat lady, every second live sports updates, bridezilla, or the person who uses Facebook as Google. All of these examples were hilarious and would be fun to spoof. Can you think of any others?

Randi ran through a list of trends she’s seeing in social media. Here are a few you may want to watch.

The Customer Experience Side of the Art of Marketing

My SMC Chicago board member colleague, Jeannie Walters, wrote an excellent review of The Art of Marketing from the customer experience perspective on her blog at 360connext.com. “It’s going to be more work. The days of thinking “I’m done” after publishing an ad, white paper or even web site are over. You are just beginning. Stay involved.”

Were you at The Art of Marketing? What did I miss?

Disclosure: In exchange for offering a discount to wiredPRworks readers, The Art of Marketing is provided two complimentary event passes. 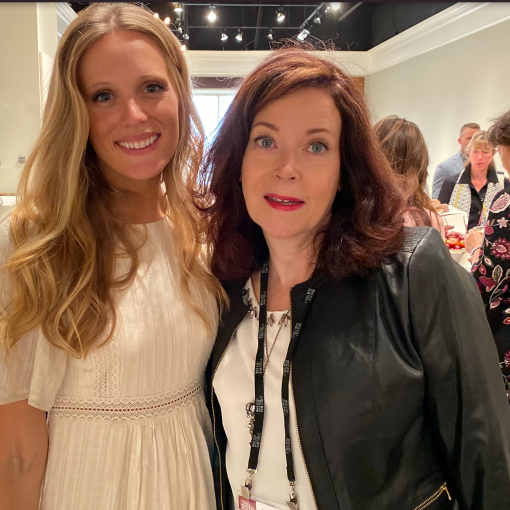 How do you feel about Fast Company’s The Influence Project? “It’s a wild, unwieldy, imperfect, and hopefully fun way to take a […]

It’s the first time I’ve shared so much information online. Thanks to Dwana De La Cerna for asking me to contribute my […]

Assignment: Talk about how to do business on LinkedIn Challenge: in 10 minutes or less. Result: How to Grow Business in 3D […]

17 thoughts on “Art of Marketing Highlights”